Wrote this for the 'Midsummer Madness' themed monthly competition in the Den of Writers...it was chosen as winner. (I get to set July's challenge now).

Anyway, I thought I'd share it with you, 'cos I'm rather proud of this one. It's less than 400 words.

Aliz nods, her eyes wide and dark in her face. “I soaked the rope in rosemary water like ye said, an’ the pegs were whittled fresh from holly.”

No tremor in her voice. Will she remain as unaffected if she is forced to use it?

“Good.” I tap my finger on my top lip and glance around the clearing. Have I missed anything? The symbol is marked on the floor with white flour, thick black candles stand at each of its points, the jug is filled with rosewater… “Let’s get on, then.”

Aliz sprinkles the rosewater and the scent of summer blooms hang heavy in the air, masking the rancid stench of fear.

The earth is warm through my shirt when I lay within the floured sign. I keep silent as the still-damp ropes bite into my wrists and ankles, their aroma sharp and cutting against that of the roses. The ground vibrates under me as the pegs are hammered in and the other ends of the ropes secured.

Curtains of black hair frame her face when she leans over me.

“Ye will stay by me, and watch to see if the madness descends?”

“Aye, my love.” She brushes my lips with her own.

Her eyes close then, shutting me out. But she nods. Again.

“Then move to yon trees and wait. Keep the blade near.”

I turn my face away so I will not see her leave. So little time we’ve had, Aliz and I, but if the madness descends on me, as it does on some men on the Midsummer of their twenty-fifth year, she will at least have something to remember me by.

Pray hope the babe in her belly is a girl, for I would not wish this uncertainty on any son. And I doubt I have Aliz’s strength to end a life if, by some miracle, I survive this night.

Posted by Katherine Hetzel at 09:24 No comments:

I'm working towards a date for a Zoomy or Facebook-livey kind of Book Launch Party, (which I'll post as soon as it's fixed) but thought I'd give you advance notice that THERE WILL BE A COMPETITION!
To enter, all you have to do is describe or draw a gemstone - but it has to be a completely imaginary one! I had great fun making up gems and their names; some ended up similar to real names, some described a gem's appearance, and others were completely made up from people's names...
My absolute favourite imaginary gem will win a copy of the book - signed and supplemented with hand-drawn (by me) illustrations, plus a small treasure box containing a few (glimmer-sized!) real-life gemstones AND some larger pieces of 'tomasite', 'jennisine' and 'black ruby'. The two runners-up will each receive a signed copy of the book. 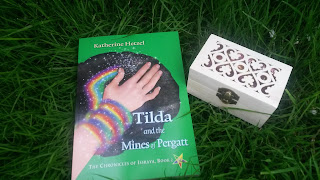 So get that imagination working and please share this competition with anyone else - especially little people - who you think might like to enter.
I've also taken delivery of some 'proper' Tilda 2's now, with the right title on the spine. If you'd like a signed copy of either a 'proper' book or a 'duff title' version (remember, the latter might be worth a fortune in years to come!) then please drop me a message to arrange it.
Look out for the date of the launch event - coming soon!
Posted by Katherine Hetzel at 20:49 No comments:

No, I didn't know there was one either! But there is, led by First Story. You can find out more about it here , but essentially it aims to promote and celebrate the pleasure and power of creative writing.
As part of the day, there's a challenge...

Simple! Why not have a go?
Here's mine: 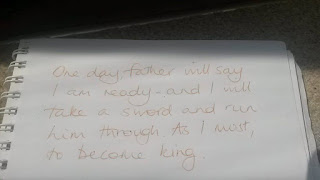 Posted by Katherine Hetzel at 11:16 No comments:

I was in two minds about posting this, because it deals with a rough time recently which resulted in a few issues around the publication of Tilda and the Mines of Pergatt.
However, I decided to go ahead and share this with you because it's another pointer towards how hard writing and publication can be when you're not completely focused. I have to say that I'm really thankful for the support of the team at Bedazzled Ink in this, which made it possible to still meet the intended publication day; they cover pretty much every aspect of the publication process themselves, and I didn't make their job easy with this particular novel!
So what happened?
In January, I received the edit from Bink. I worked through that OK and sent it back a few days later for the typeset to be prepped. Bink also worked on the cover design (which I LOVE!) and the blurb, so although there was radio silence for a while, I knew cogs were turning furiously behind the scenes.
Then - COVID. The world went a bit mad, and my head wasn't good with the weirdness of everything. I fought the panic attacks of my first post-lockdown shopping trips, stayed at home, and kept on editing Tilda #3 while I waited for the typeset of Tilda #2.
We settled a bit more into the new 'normal' and got to May 8th...when my father-in-law died. (Thought to be Covid related, but not confirmed).
Things got a bit blurry after that, as you can imagine. And in the middle of that particular cloud of grief, the typeset arrived. I worked my way through it, using it as a distraction, and sent it back on the 20th.
But something was niggling at me. There were a couple of places in the novel where I felt I'd not explained things properly or there was a lack of consistency with the first book. On the 22nd, I emailed Bink to say that, as much as it pained me to say it - we were at the typeset stage, for Power's sake! - I didn't think the book was ready to be published. Could they give me a bit more time to address the issues?
Bink might well have had a facepalm moment in the office, but they never hesitated; I was given a week.
In hindsight, I realise I was not in a good place mentally - haven't been for a while - and probably should have given the edit much more time. The Black Dog that people talk about had actually been loping alongside me at a distance since well before January; since lockdown he's been an awful lot closer at times, and I finally recognised him for what he was. I'm still up-and-down a bit, but on the down days, I allow myself the time I need to do something that doesn't involve concentration...
Back to the book. 28th May saw my typeset notes returned to Bink. A day later there was a revamped typeset back with me for final read through and I still found things to change! Mainly cos I'd missed them before, but also as a result of the changes I'd asked for previously. (I wonder if there is a record of how many times something's been read and changed and faults are still being picked up?)
Either way, on the 1st June, Tilda and the Mines of Pergatt was published digitally - hooray! Paperbacks would follow! All done!
Not quite. June 9th, I had a surprise delivery; I videoed myself opening the box!
And then, as I began to take photos to post on the Scribbles, my heart sank. I realised there was a typo on the spines... The title was Tilda and the Merjan. Talk about being in the clouds one minute, and dashed to earth the next. My first reaction was, what would readers think if they'd ordered books already and they arrived with a duff spine title? 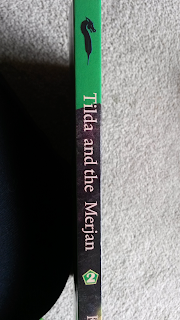 But within 24 hours, and even considering the time difference between us, Bink were on it, had made the changes, sent the cover flat to me to double check it, and the new cover version was on its way to the printers.
If you do receive a copy with the wrong title though, hang onto it - I'm reliably informed by Bink that some book collectors pay good money for copies that have mistakes on them. So when I'm rich and famous, you might be able to cash in! I have forty of them myself...they will either have a corrected 'patch' added to the spine, or be sold as is - both cheaper than a 'proper' copy - at some point in the future...
It's all been a bit mad, but we've come through and out of the other side and I'm still smiling.
At least I've learnt to recognise the Black Dog so I can take steps to keep him at a distance in future - or not tackle important stuff when he's trotting at my side.
Posted by Katherine Hetzel at 15:00 No comments:

Happy Publication Day to Tilda and the Mines of Pergatt!

Tilda's back, and her second adventure
is here for you to enjoy. 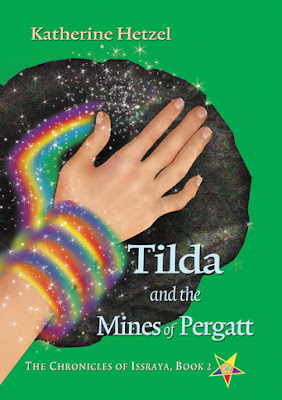 Available now from Bedazzled Ink, Amazon, and probably bookshops - but in light of the lockdown and effects on businesses from the Covid crisis, your best bet is probably to buy a digital version if you can't wait for a paperback!

Do let me know what you think of the story when you've read it... I'm working on Tilda 3, so hopefully you won't have too long to wait for her next adventure.
Posted by Katherine Hetzel at 14:30 No comments:

Now here's something a bit different! In this time of lockdown, I've created a little video to get you thinking about Tilda and the Mines of Pergatt.
I was in my garden room at the time, so you might hear a blackbird in the background (he sits in the nearby pear tree to sing to me!) or distant neighbours' children in their gardens.
If you like it, who knows, I might be tempted to read you the first chapter of the new book before it's published!
Posted by Katherine Hetzel at 20:06 No comments:

Tilda and the Mines of Pergatt Posted by Katherine Hetzel at 21:29 No comments:

Katherine Hetzel
I'm a five foot nothing tall author, with three children's novels - StarMark, Kingstone, and Tilda of Merjan - and two short story collections for children - Granny Rainbow and More Granny Rainbow - published alongside other short stories for adults. I'm also a knitter of socks, a volunteer librarian at a primary school, currently a Churchwarden, and lover of liquorice.